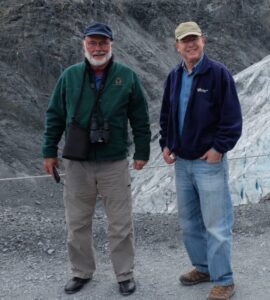 Lew (right) with his friend of 40 years, fellow academic Dr. Michael Meyer, at an Alaskan glacier.

The essence of Lewis Mandell was his breadth of knowledge and curiosity, his wonderful sense of humor, and his kindness.

Lewis Mandell was an academic, a writer, a pilot, a lifelong tennis player, an inventor and innovator, and a world traveler. His essence was his sense of humor, his breadth of knowledge, his creativity and his kindness. Lew, as he was known to friends and colleagues, was an exceptional person, a true Renaissance man.

In a tribute written for the dedication of a court bench in his name, his fellow tennis players wrote,  “Lew will be remembered as a kind man, a very funny and wildly inventive Renaissance Man, a man with wonderful outrageous ideas, and a love of travel (the more exotic the better).”

For the recipients of awards from this endowment, his is the story of a man who cared very much about his students and devoted his academic career to helping and guiding them.  It was Lew’s desire to support the efforts of Economics graduate students working on dissertations in Economics or Financial Literacy at the University of Texas at Austin, where in 1970 he earned the Ph.D. degree that launched his 44-year career.

Lew’s teaching specialization was investments and valuation at the graduate and undergraduate levels. He was a gifted and versatile educator, winning multiple awards and ultimately honored in 2008 by the State University of New York with the Chancellor’s Award for Outstanding Teaching.

His research specialized in banking issues with numerous publications to his name, and in later years he became known as one of the founding fathers of financial literacy research.  Lew conducted a ten-year groundbreaking nationwide benchmark study of the personal finance skills of young adults, which led to his creation of MoneySKILL, a free, interactive online financial education curriculum. According to the American Financial Services Association, by 2019 MoneySKILL had expanded to reach over one million users in the United States and forty foreign countries. As a result of his work, Lew received the William E. Odem Visionary Leadership Award, the nation’s leading award in financial literacy.

During his career, Lew Mandell held professorships at a number of leading  universities.  He served as Dean of Business at Marquette University and at the State University of New York at Buffalo. He was called to Washington for a year to direct research at the Comptroller of the Currency.

Lew was an extremely prolific writer, the author of 22 books. At the time of his death in 2019, he was beginning work on his 23rd. Lew’s website archives contain selected articles, congressional testimonies and media coverage from NPR, the “Today Show,” CSPAN, The New York Times, Fortune Magazine, and The Economist. He hosted radio call-in programs in two major radio markets on investments and entrepreneurship and served as a director of a publicly traded corporation.

Public comments and private messages on Lew’s passing spoke of how much his colleagues valued his friendship, how much his students valued his continuing interest in their lives and their careers, and how deeply he is mourned by old friends of a lifetime.

A former colleague fondly remembered that he and Lew would go to the gym for a pick-up game of basketball over the lunch hour.  John admits that he had never played basketball, and never once in his life made a basket, but he tried. Every time he sent a ball toward the basket it would be horribly off target.  Lew, he said, would always manage to get the ball and call out, “Nice pass, John.” He never forgot that small kindness, recounted to Lew’s family 30 years after those “nice passes.”

Many of Lew’s students continued to talk with Lew, write to Lew, and visit Lew over the years. The loyalty he inspired was simply and beautifully demonstrated by a group of former students with successful careers on Wall Street.  A year after Lew’s passing a spokesperson for the group called Lew’s wife of 50 years to wish her a Happy Mother’s Day from all of them, and to tell her yet again how much they missed him and his continuing interest and guidance.

This endowment is a fitting tribute. With it, Lew Mandell will continue to support generations of Longhorns to come and express his gratitude to the Economics Department and the University of Texas.  His legacy is assured as a devoted teacher, a respected academic, and a pioneer of financial literacy.  He was a man who changed the world with his innovations and his kindness and humor.